Process Models are sequences of tasks (or steps) that are carried out to achieve a goal. The sequence of tasks, or process flow can do conditional branching based on record data.

Creating or Modifying a Process Model

To create or modify a Process Model:

This is a task that will be carried out by a user.

) to create a new, empty Rule Set that can be filled in later.)

Choose a Form for the object the Task is attached to, allowing the user to view and modify data in the record the task is attached to. If the process is defined on the Cases object, for example, then Case data can be modified as the Task is completed. (Typically a small form is created for the purposed, showing only the data the user needs to complete the task.)

This task requires someone to click a button to Approve or Reject something. A Decision Switch attached to the Approval Step has an additional field, Approved, that can be tested to find out which button they clicked. (To learn more, see the description of the Decision Switch that follows. Then see Using an Approval Step, below.)

) to create a new, empty Rule Set that can be filled in later.)

Send out an automated notification using one of the Email Templates.

) to create a basic new template that can be modified later.)

Note:
Do not choose a template that includes a JSP page as an attachment.
Learn more: JSP Attachment Deprecation

Execute Rules in a Rule Set:

Invoke one of the Web Services configured for the application.

This option appears only in a standard process. It does not appear in a Callable Process.

The value tested in the decision branch can come from:

When comparing against a Date field, many types of Date Comparisons are possible.

Wide, solid-green shading appears on the borders of a step when the cursor is at the edge.
In the middle of a step, the corners are highlighted in red.

In the main panel, click a Task or Event
. Several elements appear next to it. Hover over them to see a description:

The final element is the connection arrow. To draw an arrow between two elements in the diagram, drag that arrow to another element: 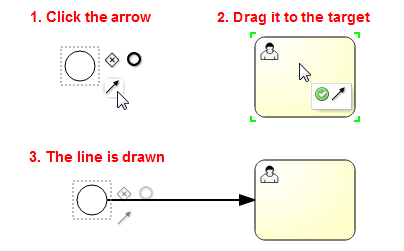 In addition to the Save icon seen earlier, the toolbar provides other icons that help you build Process Models:

Here are some other keys you can use:

When you add an Approval Step, a Task is generated for the person it is assigned to. While other Tasks have a [Complete] button, an Approval task has two buttons: [Approve] and [Reject]. The button that was clicked is recorded in a special field called Approved, with values Yes or No. When a decision switch follows an Approval Step, that field is available for testing, as shown here:

Reject could go back to a previous step. Approve will generally go forward to a new task or to the end of the process.

To create a process variable and store a value:

To use a process variable as input to another service:

To use a process variable in a Decision Switch:

Calling Java Code from a Process

Let's say you have defined a method in a Java Class. You can't call that code directly, but you can create a Rule Set. In that Rule Set you can define a Rule whose action is to invoke that method. You then create a process step that execute the Rule Set, which invokes the code.